Sungkyunkwan Scandal also known (in the Philippines) as Secret Love is the latest addition to my long list of watched Asianovelas.

Since I read the Winter 2011 issue of the Sparkling magazine, I badly want to watch this series. I’m curious on how does a gender-bender sageuk drama look like.

Before, I believed sageuk drama equals long plus less romance plus more action plus amazing story. But after I’ve watched more of them, I realized this statement is just a hasty generalization. Some of them, such as Sungkyunkwan Scandal are quite short and light. Like any other dramas, they involve skinship which is unavoidable in a romantic scene.

The drama is about Kim Yoon Hee, a girl who disguises herself as a boy to do some works in a library so she can earn money to pay for the debt of her family and to provide medical care for his sick brother. Under some circumstances, she was forced to study at Sungkyunkwan where she builds friendship, finds love and discovers her father’s identity.

Among them, my favorite is Moon Jae Shin. He reminds me of Bidam (of Queen Seon Deok) – long untied hair, great fighting skills, bright mind, soft heart and most of all, fearless eyes.

Behind his black outfit is an impulsive, stout (mapusok, I think is the right word to use) yet very profound man in his youth. I find Geol Oh very interesting, so mysterious. I would like to write an individual post about him together with the actor who played this character – Yoo Ah In.

Aside from Geol Oh, another thing I like about this drama is the strong friendship between the four leads. How Yeorim cares for Jae Shin tickles me. Hahaha. But winning the Best Couple (and even placed no.1 defeating the two protagonists) on 2009 KBS Drama Awards really did surprise me! I even wake up my younger sister in the middle of the night just to tell her that! Hahaha.

About the romance, well…obviously, I ship Yoon Hee and Jae Shin. I really don’t like Soon Jun (nor Park Yoo Chun)  in the first place. For him to end up with Yoon Hee makes the story ordinary, so predictable. The director/author didn’t even give Jae Shin the chance to confess his feelings and fight for Yoon Hee. 😢 That’s sad. For almost half of the drama, I’ve been waiting for that moment but all I’ve got is a giving up Jae Shin who let go of his feelings so easily. Oh man! You’ve got the courage to fight against numerous palace guards but can’t even confess to the girl you love the most?! Yes, I know– it’s to prevent him from getting hurt but still, it feels so unjust.

Aside from the love team, I don’t like the way they deal with the problems towards the end of the series. It’s like the complicated situations they were in miraculously became so simple that the King and the others put everything in its right place in just one click for us to get our happy ending.

I guess the resentment is due to the fact that they never shown a Joseon where people can’t be judged and treated according to their social status, a place where gender discrimination is nowhere to be found, only equality and peace. On the other hand, maybe they were just trying to stick with the history.

Anyway, all in all, I like this series. As I said, the story is quite light for a sageuk drama but probably that’s its charm. And maybe I just don’t prefer a historical drama that focus mainly on the romance. But still, I’m telling you, this is good.

And another thing, these cartoons are adorable, aren’t they? 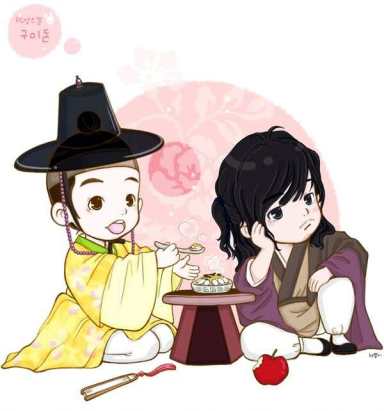