That first true love that everyone wants to experience…
A Little Thing Called Love (Crazy Little Thing Called Love) also known as First Love is my very first Thai movie and yet it captured my attention that I searched for other good Thai rom-com films all over the net.
I watched this movie early this year, February, I think. A friend of mine suggested this and another colleague gave me a soft copy. Indeed, this movie review is pretty late but I really want to write something about it and post it here. In fact, this is my very first movie review.

Nam (right-most) with her friends
The Plot
The story is about an unattractive high school girl who secretly love one of her seniors who’s well known as the so-called “dream guy” of the campus. The plot revolved around all the crazy things she did to get noticed by him. Love, friendship and family, all in one. This kind of story will surely capture all the young hearts out there. And I do love the sound tracks. I even watch piano tutorials to learn how to play its theme song.
The Main Characters 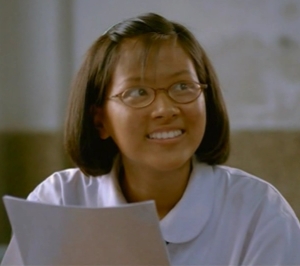 Nam
Nam is a fourteen-year old girl who has three precious girl friends and is secretly in love with Shone. She is just simple, unattractive, unpopular, to make it short, one of the members of the so-called “nobody” in the campus. She lives with her loving mom and naughty little sister. Her father is working in the US. Her family runs a small restaurant where Nam, and her friends hang out when they’re free. She’s good in English, the reason she got the lead role when the drama club did a play during the school festival. She also values her friends so much.
In her quest of trying to get noticed by Shone, she was able to transform gradually, little by little.  And who knows this girl can be this attractive.

Nam’s transformation
Her academic performance improved as well.  She managed to be in the top with a little inspiration from her father. But all of these – trying to look better, dressing fashionably, getting high grades are fruits of her hardships in order to get noticed by Shone.

Shone
Shone, on the other hand is one of the most famous guys in the school. He’s a member of their football team, a talent he inherited from his father. He’s every girl’s dream guy- handsome, kind and sweet. He’s also interested in photography. Ever since, this guy loves Nam. Yeah, they’re both secretly in love with each other. However, due to some conflicts, misunderstandings, and lack of courage he wasn’t able to confess until it’s too late. 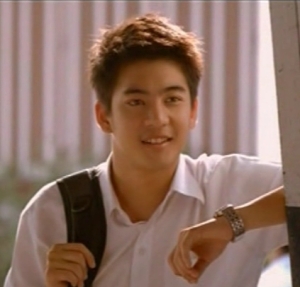 Top
Top is Shone’s best friend. They know each other since kinder garten. He’s a transferee from another school. Like P’Shone, he’s also good in football and can make girls fall in love with him by just smiling. To complicate things he happened to fall in love with Nam. Before, he and Shone made a promise that they will never love the same girl ever again. Being too loud and expressive, he confessed his feelings to Nam before Shone did. Nam didn’t answer him, and he considered it as a yes.
Thus, for Top, Nam once became his girlfriend but all of it was a big misunderstanding. They split up after he kissed Nam in front of everybody including Shone. 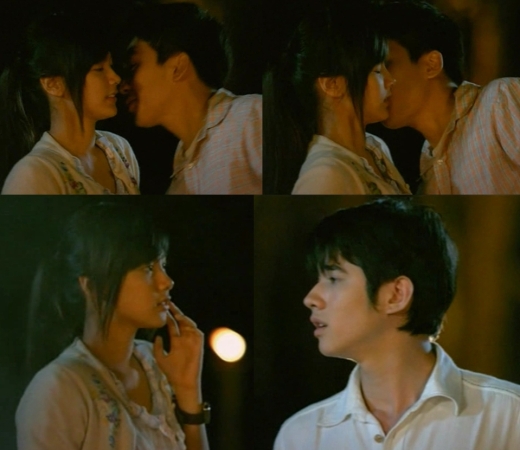 Top kissed Nam in front of Shone
Top said that in all of his past relationships, his break up with Nam is the most painful. He asked Shone to make a promise that he will never hit Nam, ’cause he just can’t take his best friend and the girl he loves to be together, for him it’s unbearable. This promise was probably the main reason Shone didn’t confess his feelings to Nam until she came back after she had to go abroad to study and to live with her father.
To tell you honestly, I do like second characters whether in drama series or a film like this. When P’Top came to the spotlight, I was like “Oh, yeah! Here comes the one who will make things even more complicated.” I like how the second characters value the girl they love. The only thing I hate in P’Top is his being aggressive.

Nam rejected Top (up), Shone made a promise with Top that he will never hit Nam (down)
Though I felt sorry for him during this part, it didn’t went far that I like him to be the one for Nam instead of Shone.
My favorite scene

Shone’s Scrapbook
In any series or movie, my favorite scenes always include the most heart-breaking ones. InA Little Thing Called Love, for me this scene was the best, only because I love the scrapbook made by Shone. It’s full of pictures of Nam, most are stolen. It also summarizes their love story and most of all it reveals Shone’s true feelings.

My favorite scene
My Thoughts…
Because of this movie, Thai films leveled up in terms of popularity. Its nice and cute story combined with a school, romantic-comedy genre touched so many including me. I was impressed by this film but I didn’t expect that it will boom this much in the Philippines to the extent that a local TV channel will air it. I strongly suggest this movie. The story is great and it’s complete. I’ve watched a lot of Asian movies and most of them failed to leave a mark on me because of incomplete, unjust and confusing plot, having no story at all. That’s why I like this movie, it’s different. Although my attachment to this film can’t be compared to my addiction to my favorite dramas, (like I don’t even know Nam’s real name) I can pretty say, that if it’s only a series with 16 episodes or more, I will surely get hooked to it.

All of us have someone who is hidden in the bottom of our hearts. When we think of him, we feel like uhmm… always feel a little pain inside,… but we still want to keep him. Even though I don’t know where he is today, what is he doing, he is still the one who makes me know this ‘little thing called LOVE’.
– Nam.