Finally, ABS-CBN has released the official teaser of Dream High. I was doing something on my laptop last night when I heard the intro of  the song Dream High from our TV in the living room. I was able to watch it on YouTube just now.
Now that the series will air on a local TV network, Dream High will surely become more popular among Filipinos, especially among teens who are engaged with K-Pop. Yay, I can’t wait. I’m so excited to hear my favorite lines in Tagalog!

Dream High Cast (Courtesy of KBS2/JYP Entertainment)
For me, the voices, of course, are a little bit weird. But it’s natural. It’s because I’m used to their original voices that they sound kinda awkward when speaking in Filipino. For me, though I’m not still used to it, the characters’ Tagalog dubbers are doing their best to preserved the original cast’ voices like in the case of Hye Mi and Sam Dong. If not, the dubbers are still doing their best to portray the characters’ personalities through their voice like Pil Suk’s.
I also want to ask you, Filipino readers, if Sam Dong’s voice is familiar to you. I’m not yet sure but I think he sounds like Nakatsu of Hana Kimi. Don’t you think so? I have a feeling that for the nth time, I’m gonna hear Jefferson Utanes’ voice coming out from my favorite character. Anyway, he’s a good dubber; I have no problem with him. In fact, I’m glad that they didn’t dub Sam Dong with provincial accent like the “Ala e” thing in Batangas or the typical probinsyano accent using words like “dine” and stuff. I’m not a Korean so I don’t really know if Sam Dong sounds weird with his Korean accent but I know he does if he’ll be dubbed with Filipino promdi accent. Fortunately, it’s not the case, and it is something to be thankful of.
If I have a complaint with this Filipinized version of Dream High, it’s their characters’ names. Oh, come on! Angelie for Baek Hee and (fine, let’s include it) Kelly for Hye Mi are still forgivable. But Gino for Jin Kuk, Gelou for Pil Suk and the worst, Marco for Sam Dong are unsuitable! (Of course, Jason remains Jason.) Maybe it’s better if ABS just preserved the characters’ original names like what they did in some dramas like He’s Beautiful, Meteor Garden and Boys Over Flowers. Five simple Korean names aren’t that hard to memorize and Dream High, I think, is already famous in the Philippines so more probably most of the viewers know the characters already. 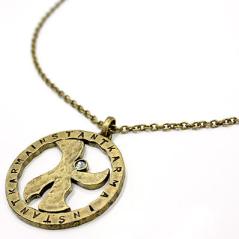 Dream High Official K-pendant Necklace by The Kiss
Anyway, I’m still going to wait for this to air. The final date is yet to be released. Though if the drama started airing, viewers will look at me whenever I wear my K-pendant necklace, and that’s a bit awkward. And most probably, many will buy their own, too.